Studies on neurodegenerative disorders such as Alzheimers Disease have demonstrated that the ketogenic diet may not only provide some relief of symptoms, but could also reverse some of the brain cell death processes associated with these diseases.

Brain cells (neurons) depend heavily on glucose as an energy source, especially when the diet is high in carbohydrates. A high carb diet generates high levels of blood sugar (glucose) and insulin.  Insulin is the hormone which pushes glucose into neurons. The problem is that after years of being subjected to high blood sugar and insulin levels, body cells become resistant to insulin's message.  The cells shut the door on insulin's request to send in glucose.

It's like being constantly subjected to intense sound.  Eventually, your ears become numb to the stimulus.  The same thing happens in body cells when insulin levels are chronically high.  The brain cells start to malfunction and close the door on insulin and glucose. As the neurons take up less glucose, and the insulin resistance worsens,  more and more of these brain cells become damaged and die because they don't have enough cellular fuel in the form of glucose.

This is why Alzheimers disease is also called Type 3 diabetes.  Type 2 diabetes is characterized by the same kind of insulin resistance in the liver and muscles.

How a Ketogenic Diet Helps 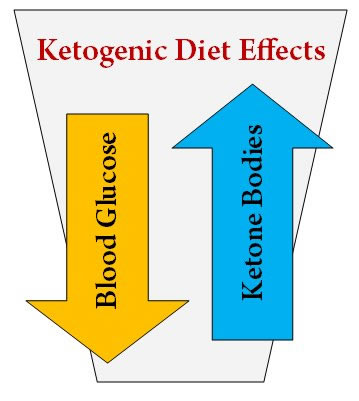 First, adopting a ketogenic diet increases ketone bodies in the blood. The brain can use these ketones as fuel when brain cells are having trouble obtaining and metabolizing glucose.

In a study designed to demonstrate the brain's ability to use ketones, volunteers were given an injection of insulin designed to drop blood sugar to levels which would deprive the brain cells of glucose and cause a hypoglycemic reaction. The volunteers developed the nausea, wooziness and brain fog associated with low blood sugar. The subjects then fasted for 60 days and achieved blood ketone levels of around 8 mmol.

In the second part of the experiment, the researchers again infused insulin and blood sugar dropped to a level that should have caused a hypoglycemic reaction, but these volunteers showed no symptoms of low blood sugar, proving that the ketone bodies were being used as fuel in the brain instead. Another  similar study done in 1991 showed the same result.

In addition, coconut oil is now being used to treat Alzheimer's disease.  Coconut oil is full of medium chain fatty acids. These fatty acids can't be stored in the body, so they are immediately burned for fuel when consumed. This produces lots of ketones in the body, and the extra ketones then provide fuel for the glucose starved brain. Here's another link to Dr. Mary Newport's website. Dr. Newport was successful in helping her husband regain partial function after a diagnosis of Alzheimer's. She began giving him coconut oil. She posits that the medium-chain triglycerides were converted directly into ketones in the blood, and this gave his brain cells another form of fuel. She wrote a book about her discovery called "Alzheimer's Disease: What If There Was a Cure?: The Story of Ketones"

A 2012 study in the Neurobiology of Aging provides evidence that being in ketosis helps people with mild cognitive impairment (a precursor to dementia and AD) improves memory.

The latest information on treating Alzheimers disease with a low-carb strategy can be found in the resources listed below.

As further research is done, the mechanisms between insulin resistance and Alzheimer's disease will be identified but I wouldn't wait for that. Do what you can today to get your blood sugar and insulin levels into normal range.

Done with Alzheimers Disease. back to Home