The most effective diabetes treatment is one which helps people with diabetes lower carbohydrate intake. Eating a large amount of sugar and starch at one time causes blood sugars to spike after the meal. That large blood sugar surge then requires a large insulin response from the pancreas (or in an injection). Too much insulin then crashes blood sugar down.  The image below is from a study which looks at blood sugar reactions to high carb meals. 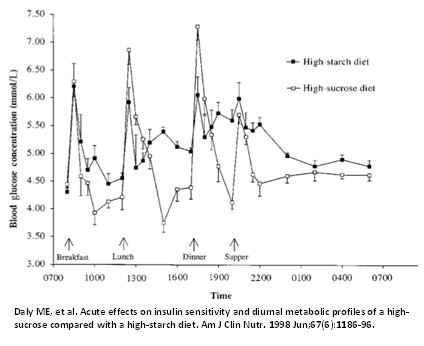 This blood sugar "roller coaster" is rooted in a belief in the mainstream medical community and diabetes organizations that carbohydrates have to be part of the diet for good health. They try to hide this with vague language about individual preferences for choosing macronutrient intake percentages, but the latest nutritional recommendations from the American Diabetes Association still says that carbohydrates are important nutrients and mention the "130 grams per day to support the brain" concept, which I explain further below.  But I do see some progress. The 2019 Nutritional Therapy Consensus paper admits that low-carb diets do have the best effect on lowering blood sugars.

The bottom line is that advising people with diabetes to eat carbohydrates is wrong. Carbohydrate intakes above 130 grams results in high blood sugar (hyperglycemia) which causes glycation damage to body cells and tissues and guarantees the development of long term complications such as peripheral nerve pain (neuropathy), kidney damage (nephropathy), a loss of eyesight (retinopathy) and other common diabetic complications.

Worse, for those who take insulin injections, the large doses of insulin that have to be given to match high blood sugar spikes can result in low blood sugar (hypoglycemia) episodes which are incredibly dangerous, since severe hypoglycemia can cause a loss of consciousness or death.

As mentioned above, I think one reason for this advice is a belief that at least 130 grams of carbohydrates per day are needed to keep the brain functioning. This is only true if one is eating large amounts of carbohydrate on a daily basis.  The brain only needs a higher level of carbohydrate intake if the body is carb-adapted, meaning the body is having to process and store sugar and starch continually. This is because insulin levels will be chronically elevated and stored fat will be inaccessible to make ketones when food is unavailable.

If a person is keto-adapted, meaning insulin levels are normal, than the body is able to make ketones to supplement brain fuel stores between meals.  If a body is keto-adapted, then the brain only needs about 50 grams of carbohydrate/day, and that can easily come from gluconeogenesis. So the difference is in the primary fuel supply - carbs or fat.

In my opinion, the sensible approach to managing blood sugar safely is to stop eating foods which drive up blood sugar.  It's what Dr. Richard K. Bernstein in his book The Diabetes Solution calls the Law of Small Numbers:  eating small amounts of carbohydrate results in the need for less insulin. Smaller does of insulin result in fewer episodes of dangerous low blood sugar or hypoglycemia.

People with diabetes have a choice to become more effective in their diabetes treatment, no matter what causes the diabetes. They can start a low-carb, moderate-protein, higher-fat diet, limit carbohydrate intake to more reasonable and healthy amounts, and effectively stop the blood sugar roller coaster.  Blood sugars highs will be greatly reduced and having higher blood ketone levels allows the brain to access an alternative fuel when blood sugar is too low.  This means freedom from the symptoms of hypoglycemia.

A ketogenic diet treats diabetes at the root cause, and is a much safer, more effective plan than injecting insulin to counteract the consumption of high-carb foods. This is true for both type 1 diabetics  who must inject insulin, and type 2 diabetics suffering from too much insulin, a condition known as insulin resistance.  Woman diagnosed with gestational diabetes can benefit as well, since this condition is actually undiagnosed insulin resistance, but it is treated with insulin shots. A recent paper by Feinman et al lays out the science supporting the obvious choice of a low carbohydrate diet for diabetics.

Although type 1 and type 2 diabetes have different causes, limiting carb intake is the key to blood sugar control for both camps.  This is especially important for children with type 1 diabetes. The danger of the type 1 diabetes diet recommended by the ADA is compounded by the fact that the ADA tells parents that children must have carbs for growth. This directive has no basis in fact and actually makes achieving blood sugar control impossible. 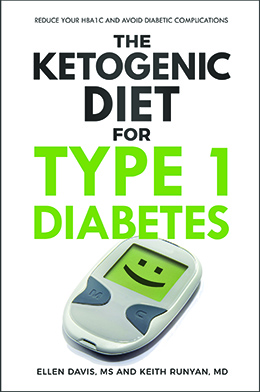 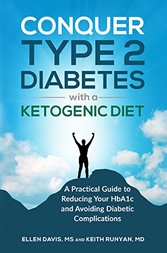 For more information on using a low carb, high fat diet as a diabetes treatment plan, check out the new book on type 2 diabetes that I've written with Dr. Keith Runyan.  Dr. Runyan is a type 1 diabetic, and has much to say about this health condition in our Type 1 diabetes book as well.  He uses a ketogenic diet to keep his HbA1c at 5.0 and to avoid hypoglycemia, a goal he says is one of the greatest benefits of a ketogenic diet. You can click on the book covers too.

You can also listen to a great podcast conversation I did with the Raphi Sirtoli over at Break Nutrition in which we discussed using a ketogenic diet to treat diabetes and cancer.

If after reading either of our books (links above and at the end of this page), you feel you need some individual attention to optimize your diabetes management, Dr. Runyan can assist you with a personal consultation via Skype. He can be reached by way of his blog at: https://ketogenicdiabeticathlete.wordpress.com/coaching/.

Let's look at the facts. The primary goals of a diabetes treatment plan are to:

Controlling diabetes and managing blood sugar levels is not an easy task. It involves serious lifestyle and psychological changes, and newly diagnosed diabetics don't always get the correct information they need to make the best decisions.

For example, identifying and switching to the most effective diabetic diet is a challenge because as mentioned, a diet high in carbohydrates makes blood sugar control very difficult. Maybe the ADA recommends a higher carb diet because they don't want to be responsible for deadly hypoglycemic episodes. But over time, high blood sugar condemns those with diabetes to diabetic complications instead.

The solution is really simple. If carb intake is lowered gradually and medications or insulin doses are reduced at the same time, the patient can get off the blood sugar roller coaster.

Implementing the ketogenic solution may take some work, but it is worth it. People who are newly diagnosed with diabetes are probably used to eating higher carb foods and may be used to being to convenience fast foods. After diagnosis, they have to learn how to put together and cook a diabetic meal plan and switch to a way of eating.  Hopefully, the learn about and choose to eat a low carb diet.  Then they also have to learn to use new tools such as glucometer and blood sugar level charts to track their blood sugar, and learn new terms such as ketosis, ketoacidosis, gluconeogenesis, insulin resistance, dawn phenomenon and a long list of other new concepts that now impact their lives.

A Ketogenic Diet is an Effective Diabetes Treatment

Although it may be difficult at first, people with diabetes learn from hard experience that permanently restricting carbohydrate intake by adopting a low carb diet makes life on a diabetes treatment plan easier because:

Here's a great presentation on how Type 2 diabetes can be reversed with a low carb, high fat diet from Dr. Sarah Hallberg.

Done with Diabetes Treatment, back to Home