This coconut macaroon recipe has just enough sweetness and has a nice chocolate coconut flavor. And these cookies are good for you too.

Coconut has some pretty remarkable health benefits. It helps to strengthen the immune system and the digestive tract, and it can also help lower blood pressure and stabilize blood sugar. 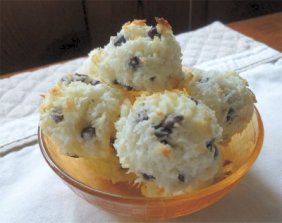 *any trace of grease in the bowl will cause the egg whites to collapse.

Here's another interesting fact about coconut oil. It's full of medium chain fats. These fatty acids can't be stored in the body, so they are immediately burned for fuel when consumed. This produces lots of ketones in the body. In situations where the brain is unable to burn glucose for fuel, ketones can be used instead.

It's for this reason that coconut oil is now being used to treat Alzheimer's disease, a disease in which the brain is insulin resistant, and unable to get enough glucose to function correctly. See Dr. Mary Newport's book Alzheimer's Disease: What If There Was a Cure?: The Story of Ketones.  There is also evidence for using coconut oil to mitigate the symptoms of Parkinsons Disease, epilepsy and other brain disorders.

Of course, a ketogenic diet can have the same effect on brain function, which is why I think it's the healthiest diet in the world.  So, go ahead, enjoy this coconut macaroon recipe, it really is good for you.

Done with Coconut Macaroon Recipe, back to Low Carb Recipes