Ketocal is Not Real Food

Ketocal is a product made by a company called Nutricia North America. It's designed to be a quick fix solution for administering the ketogenic diet to children with epilepsy. The company's website says this product is:

The word "convenient" should be your first red flag. It usually means "we can't use real food as its shelf life isn't very long, so we used pseudo-food ingredients that allow us to implement industrial production methods and store the end product in a warehouse for months at a time."

This is how all processed foods are created, and they all have corn syrup and hydrogenated trans fats in common. Feeding any living thing, including humans or rats, a diet of trans fats from hydrogenated vegetable oil will make them very sick with metabolic syndrome, heart disease, liver damage and more.

Take this study for instance. The researchers gave the experimental group of rats high levels of partially hydrogenated corn oil. The rats got very sick, and worse, the ketogenic diet got blamed for the ill effects! I assert that it wasn't the diet, it was the quality of the fat used.

I have the same issue with Ketocal. Look at the ingredient list. It's full of trans fats and pseudo-foods which have been shown in studies to damage the body.

Not only does it contain hydrogenated vegetable oil, but adds insult to injury with corn syrup. This combination of ingredients has been shown in research studies to cause serious bodily harm. Let me explain: 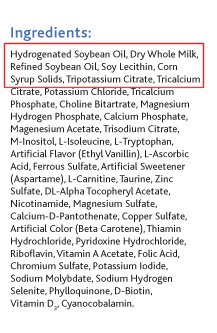 Hydrogenated Soybean oil: there are so many reasons why this is a recipe for disaster:

And that's just the first ingredient! So far, this product contains substances which are known to contain anti-nutrients, pesticides, industrial chemicals and transfats.

Dried Whole Milk: the process of making dried milk introduces transfats into the final product. The milk is sprayed into air which has been heated to 400 degrees. At that temperature, the fats in the milk become oxidized. These oxysterol products are known to be atherogenic.

Corn syrup solids: Corn syrup is implicated in so many disease processes.. metabolic syndrome, diabetes, and because of it's high fructose content, it has been shown to cause fatty liver disease when consumed in large amounts.

I won't go into the vitamins added to this product. I would guess that they are made from industrial sources and increase the chemical load of the Ketocal product.

This product is being given to children who already have health issues, and in my opinion, it just stresses their bodies further.

Why can't this company make a product that helps heal the patient instead of making them sicker?

Keto Kind was developed by two young entrepreneurs in response to the need for a healthier, organic liquid meal product for people following a ketogenic diet.  The product was developed following the latest science on ketogenic diets.  The scientific advisory experts consulted in the development of this product include Dr. Nasha Winters, Miriam Kalamian, Dr. Brian Lenzkes, Dr. Keith Barr, Travis Christofferson and other long-term ketogenic experts.

Done with Ketocal, back to Epilepsy Treatment