What is Insulin Resistance?

Insulin Resistance is a condition in which chronically high levels of blood sugar and insulin have impaired the body’s mechanism for regulating insulin and blood glucose (sugar). In short, because there is too much insulin circulating in the body at any given time, your cells become less responsive to it.

How does insulin become chronically high?  When you eat carbohydrate containing foods, your gut breaks it down into a simple sugar called glucose. Insulin, the hormone which helps the body store glucose, is secreted in response to any meal which contains carbohydrates. As more carbohydrate is consumed , more insulin is secreted. In addition, insulin is a fat-storing hormone, so when blood insulin levels are high, any extra calories are stored as fat.  Insulin keeps stored fat locked in the fat cells, as long as carbohydrates (glucose) are available for fuel instead.

If a person eats large amounts of carbohydrates on a daily basis (as Americans have been doing since the USDA published the Food Pyramid), baseline blood sugar and insulin levels rise and rarely return to a normal to low baseline.

Over time, the cells of the body become resistant or "numb" to the high amount of insulin circulating. More and more insulin is required to push blood glucose into the cells, and more and more fat gets permanently locked into the fat cells.

As the condition of resistance progresses, pre diabetes symptoms develop, and eventually if left untreated, the pancreas becomes damaged and is unable to produce enough insulin to counteract the high level of blood sugar. The blood sugar levels then become chronically high, and the person gets a diagnosis of Type 2 diabetes.

So the process of developing type 2 diabetes can be recognized as a linear progression over time: 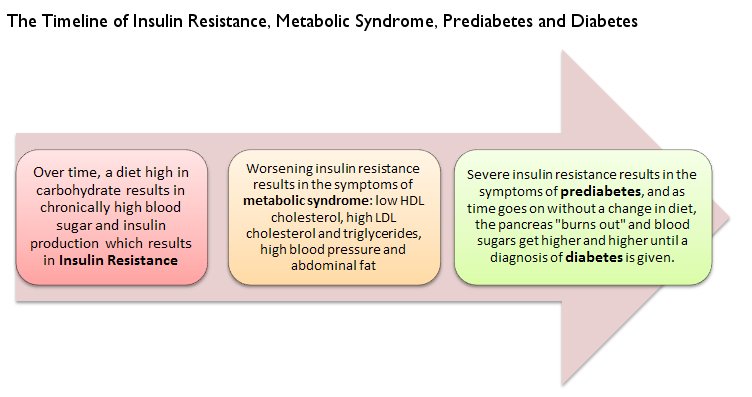 Over the past 45 years or so, as Americans have been advise to follow a low-fat, high-carb diet, more people are suffering from chronically high blood sugar and insulin levels. In turn, the number of people diagnosed with diabetes has increased dramatically in the US, and indeed all over the world, as other countries adopt the standard low-fat, high-carb American diet. Worse, very young children are now being diagnosed with type 2 diabetes in greater numbers.

Insulin resistance is closely linked with a variety of health problems, such as abdominal obesity, high blood pressure, high cholesterol, high blood triglycerides, and low HDL cholesterol.  This particular combination of symptoms was identified and labeled metabolic syndrome by Stanford endocrinologist Gerald Reaven in his 2000 book Syndrome X.  Here is some more information on how to reverse insulin resistance symptoms and avoid a worsening of insulin sensitivity in the future. Dietary changes are a must, but high intensity exercise is another good tool, as it can have the effect of making muscles more insulin sensitive. This may explain why athletes can handle a high-carb diet.

Done with Insulin Resistance, Back to Diabetes Treatment