What is Lean Body Mass?

Lean body mass (LBM) is a measure of the total weight of a person’s bone and muscles minus their fat weight. Put another way, LBM is a person’s total weight minus their total fat mass.  Having a higher LBM is healthier because muscle is more metabolically active which increases your metabolic rate. In addition, having more muscle mass provides greater strength and agility.  And of course, there's the "how you look" factor.

In terms of diet, a person’s LBM determines how much protein they need to eat on a daily basis to maintain muscle mass.  Evidence for this method comes from studies which measured nitrogen balance in people who were put on a very low calorie diet (VLCD) to induce weight loss. 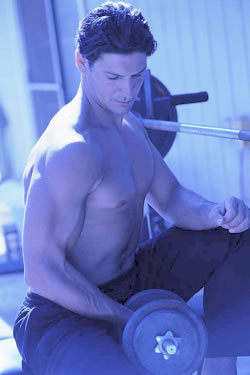 Nitrogen balance is a measure of muscle destruction (catabolism) in the body when weight is lost.

Researchers found that people on a very low calorie diet which was predominantly carbohydrate-based and low in protein lost fat weight but also lost a great deal of muscle mass.  Losing muscle mass slows metabolism even further, which puts an obese person in worse metabolic shape than before they started dieting.

In contrast, when people were put on a VLCD which emphasized protein intake, people lost fat and maintained a much greater percentage of their muscle mass.  The research showed that if adults take in 1.0-1.8 grams of protein per kilogram of LBM on a VLCD, they show a positive nitrogen balance, meaning they retain optimal muscle mass while they lose fat weight.

Although none are completely accurate, there are many ways to predict a person’s body composition of lean mass and fat.  The most common prediction methods are listed below:

For a less accurate but cheaper and usable method, just buy yourself one of the many BioImpedance Scales

available﻿. When you stand on the glass surface of one of these scales, it pulses an harmless electrical signal through your body which estimates water and fat percentages and provides an estimate of LBM.

And finally, the following calculations can be used to estimate LBM:﻿

(where W is body weight in kilograms and H is body height in centimeters.)

If you want to learn more, there’s a great post series here which goes into great detail about the flaws associated with the measurement of of body composition.

Done with Lean Body Mass, back to Daily Protein Requirement.