What Causes Diabetes?  It Depends.. 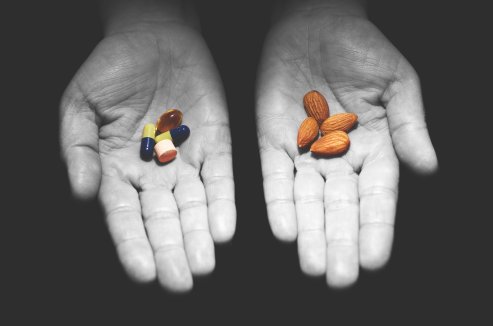 The answer to the question "What causes diabetes?" depends on the type of diabetes being discussed.  Effective treatment for any type of diabetes can start in nutrition. Let's look more closely at this.

Overall, diabetes is a health condition in which blood sugar or glucose levels are higher than normal for various reasons. These levels are driven by our diet. Food macronutrients get broken down into tiny parts in the gut and absorbed into the blood stream where it can affect blood sugar levels.  There are three main types of macronutrients:

When a mixed meal is consumed, the carbohydrates are broken down into glucose. Glucose is used by your cells to make energy. In response to a meal and a rise in blood glucose, an organ called the pancreas secretes a hormone called insulin.  Insulin is secreted in step with the amount of carbohydrate coming into the bloodstream.  It acts to move glucose from your blood stream into the cells where it can be metabolized for energy. Insulin also acts to hold stored fat in fat tissue.

However in people with diabetes, insulin can't do its job, and reasons vary with the type of diabetes. Hence, the action of insulin is relevant to the question of what causes diabetes and key to the diabetic condition. Below is a discussion of the various types of diabetes, their characteristics, and possible causes for the development of each disease.

Type 1 diabetes: T1DM is an autoimmune disease in which the pancreatic beta cells which secrete insulin have been damaged or destroyed. Autoimmune diseases are those in which a person's immune system attacks body tissues and cells as it would a foreign invader.  The disease is mostly found in children, but it can manifest in adults as well. In adults, type 1 diabetes is called Latent Autoimmune Diabetes in Adults or LADA.

The end result of this pancreatic cell destruction is that no (or not enough) internal insulin is made.  Without insulin, the body cannot move glucose from the bloodstream into the cells or keep fat in the fat cells. Blood sugar levels get very high, fatty acids pour out of fat cells, and a condition called diabetic ketoacidosis occurs. Without the administration of external insulin injections, type 1 diabetics can become very sick and die.  Of all the people with diabetes, 5-10% of those are type 1 diabetics.

Causes: Scientists don't really know what causes T1DM. Research indicates that there may be a genetic component that in combination with an environmental trigger, starts a path of destruction. The genetic component could include a person's immune system or there may be genetic anomalies in the pancreatic beta cells themselves that are involved. The various environmental triggers may include living in northern latitudes.  For instance, in the book The Survival of the Sickest, the author discusses how developing high blood sugars may have been an adaptation to living in northern latitudes. Higher blood sugar would lower the freezing point of blood and stave off freezing to death.

In addition, the consumption of gluten and exposure to various adenoviruses has been implicated. People with celiac disease, a severe reaction to gluten consumption seem to also exhibit T1D at higher rates. See this paper for more information.

Other possible triggers may include the consumption of dairy products.  This is controversial but worth studying. In general, people with type 1 diabetes can effectively control their disease by adopting a ketogenic or low-carb diet.  This is discussed in more detail on this page and in my book The Ketogenic Diet for Type 1 Diabetes.

Type 2 diabetes: T2DM is a condition in which the pancreas is making plenty of insulin, but over time, chronically high levels of blood sugar and insulin have resulted in an inability of body cells to respond to the insulin signals normally. An analogy would be that the "shouts" coming from insulin have gotten so loud and persistent, the cells have developed "a hearing loss".  Because insulin can't move the blood sugar into the cells where it can be metabolized, the sugar backs up in the bloodstream and damages various body tissues. In addition, the higher insulin levels result in weight gain and other metabolic derangements.

Eventually, the pancreas becomes exhausted from trying to keep up with insulin demands and fails. Blood sugar levels climb even higher, and insulin injections are then needed. to manage it. The high blood sugar and insulin levels result in the complications of type 2 diabetes, including higher rates of heart disease. Hence, type 2 diabetes is really a condition of insulin resistance (IR.  The obesity that so many like to say is the cause is just another symptom of the insulin resistant condition.

Causes: The causes of insulin resistance may have a genetic component and there are various other factors being researched, but dietary choices are very much involved.  It is clear that for some people, the consumption of high amounts of carbohydrates over a long time period results in chronically high blood sugar and insulin levels and the metabolic damage that ensues.  About 90-95% of diabetes diagnoses are type 2. The good news is because diet is strongly implicated in the cause, changing said diet can result in a reversal of symptoms. Reducing carbohydrate consumption can help all diabetics normalize and manage blood sugar levels more effectively. This is why a ketogenic diet plan  geared toward diabetes treatment is so effective at reversing the symptoms of type 2 diabetes.  You can learn more in our book Conquer Type 2 Diabetes with a Ketogenic Diet.

Type 3 diabetes: The term type 3 diabetes was coined to describe a condition of insulin resistance in relation to the brain and Alzheimer's disease.

Cause: The underlying theory is that the same type of insulin resistance and inflammation seen in type 2 diabetes manifests in the brain as well and results in the death of brain cells over time. Brain cells are highly dependent on glucose, and if they become insulin resistant, the availability of that glucose is compromised. In addition, just like the insulin resistance and resulting inflammation that results  in the arterial blockages and heart disease associated with T2DM, this brain insulin resistance and inflammation results in blockages in the brain synapses that make up memory and cognition. See this paper and this paper for more information.  Hence, lowering carbohydrate intake is a good first-line defense against this horrible disease.  For more information, see Amy Berger's excellent book out on this subject called The Alzheimer's Antidote.

Type 4 diabetes: T4D is a condition in which elevated insulin levels caused by insulin resistance result in severe episodes of reactive hypoglycemia (low blood sugar) and the intense nerve pain of autonomic neuropathy.

Cause: There hasn't been much research, so this is not backed up by much evidence, but there may be a relationship between the excess insulin and the excess adrenaline released by the hypoglycemic reactions. See the book Type 4 Diabetes for more information.

Gestational diabetes: This form of diabetes manifests in some women during pregnancy.

Cause: Gestational diabetes is closely linked to insulin resistance and IR-related conditions such as polycystic ovary syndrome (PCOS).  Women with PCOS have an approximately three times greater risk of developing gestational diabetes due to IR and high insulin levels. See this paper.

Nutritional Advice on What Causes Diabetes

So as you can see from the explanations on what causes diabetes above, most people with diabetes can develop better control of their health and the effects of their particular illness by changing the way they eat.  The savings in cost and pain and suffering would be astronomical if the "experts" were to just admit the simple fact that what causes diabetes can be treated effectively with dietary methods, and then accordingly advise those with diabetes to dramatically reduce their consumption of carbohydrates.

Done with What Causes Diabetes, back to Diabetes Treatment