Meal plans which don't support the goal of stabilizing and reducing blood sugar and insulin levels should be avoided.

As an example, consider the meal plans suggested by mainstream diabetes educators and organizations such as the American Diabetes Association.  In 2018, the guidelines for diabetics in designing a meal put the carbohydrate level of each meal in the 60-75 grams per meal range. So what's wrong with these meal suggestions?

The problem is they are too high in carbohydrate to maintain the blood sugar levels that the American Diabetes Association itself recommends for good health: 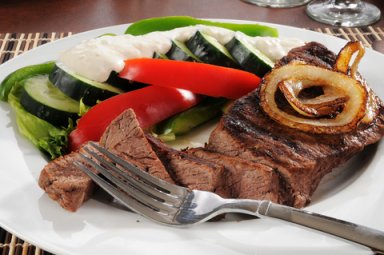 Meal plans which emphasize fats and proteins do a better job of controlling blood sugar. This is exactly what a ketogenic diet plan offers. An example of a meal which would help a diabetic stabilize and control blood sugar and insulin might be:

Total calories for this meal would work out to 610.5 and the caloric ratio of "carbohydrate:protein:fat" would be 16% carbs, 25% protein and 60% fat.

According to the more than 50 studies done on the effects of ketogenic diets on diabetic and non diabetic health, this ratio of fat and protein to carbohydrate intake would keep the blood glucose levels well under 130 mg/dl. And most importantly, ketogenic meals taste better and do a better job of satisfying hunger. These factors which would help the patient stick to the diet, and consistently control blood sugar and insulin to healthy levels.

Here's a full day's menu of examples of diabetic meal plans that can be enjoyed on a ketogenic diet:

As you can see from above, a basic diabetic meal plan revolves around a source of fat and protein (meat, chicken, seafood) and non starchy vegetables dressed with fats such as butter and low carb sauces. Desserts are usually lower carb fresh fruits. Personally, I like to make low carb shakes with almond milk and cream, because I can change up the flavors to suit my tastes on any given day.

Done with Diabetic Meal Plan, back to Diabetes Treatment